[August 12, 2014] Los Angeles, California nearly 50 years ago experienced one of the worse riots in American history. The Watts Race Riots took place August 11 to 17, 1965 and involved massive racially-fueled violence. Many have studied the riots and a number of lessons for city government have come from that effort. 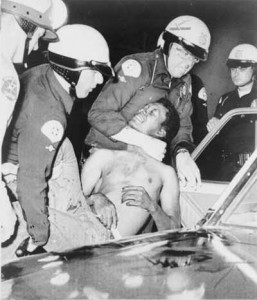 There is usually an “inciting event” that sparks riots. We have seen this in several countries over the past century. France is a good example of riots taking place after an inciting event. On the evening of August 11, 1965 in the Los Angeles neighborhood of Watts, an African-American man was pulled over for reckless driving. After a confrontation, the man was subdued by physical force. Rumors about police brutality spread quickly and groups of African-Americans gathered and began attacking police and destroying property.

The police and community leaders met the next day but were unable to quell the riots. It is estimated that over 30,000 adults were directly involved in the riots. Many in the community saw the rioters as rising up against an “oppressive system.” Referring to the rioters, a civil rights activist said that the riots were “…carried on with the express purpose of asserting that they would no longer quietly submit to the deprivation of slum life.”1

What were the root causes of the riots in Watts? A report from the California governor’s office identified high unemployment, poor schools, and other inferior living conditions of African Americans in Watts. A U.S. Commission on Civil Rights blamed social problems like unemployment and prejudice. What none of the many expert studies mentioned was a failure of leadership. The leadership failure did occur in both the city government and local community. Very few would have the courage to admit to this failure of leadership. And that means we will continue to see more failures in leadership.

Fast forward to today … and in the community of Ferguson near St. Louis a “night of protests and looting” broke out after the fatal shooting of an African American teenager by police. Yesterday, when a reporter asked a resident what happened, he said, “This is exactly what is supposed to be happening when an injustice is happening in your communty.”2  The NAACP issued a statement saying, “The death of yet another African-American at the hands of those sworn to protect and serve the community where he lived is heartbreaking.”2