[July 19, 2014] The current immigration debate is really about political power. The rhetoric coming from Washington DC would make it appear that the United States is on a humanitarian mission to save families form Central and South America. There is no argument that when historians look back on these years, they will see that the costs to the taxpayer were enormous. The dollar expense will be large but that is not what will be focus of historical deliberations. It will be the loss of confidence and credibility in our politicians, an era when confidence already at an all time low. 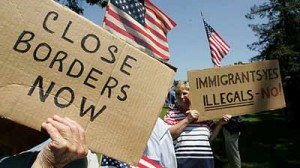 There are many who say that gaining political power via the ballot box is the main reason we are having such an emotional debate on immigration. There is never a discussion on what Americans value (freedom, honor, integrity, etc.) but there is a lot of talk on dehumanizing the other political party. Politicians know that they can have a low level of confidence and credibility to be elected; they just have to have more of it than someone they are running against in an election.

Many U.S. citizens are aghast at what is going on. We see a “throw the bums out” philosophy every time an election cycle comes back around. Of course, that never happens. The U.S. immigration debate is not getting to the problem we have in the United States. Yet, Americans are unusually tolerant of their political leaders … it is very much a part of our democratic culture. We even tolerate a certain level of corruption. There is a tipping point however that citizens will not tolerate. No one knows exactly where that line is drawn. We will only know when it is crossed.

Let’s hope for a more professional debate on immigration. It is up to the most senior elected officials to show real leadership and take a stand on a fair and open debate. A fair debate is probably not going to happen although it would be in the best interests of our citizens. And there still remains confusion with regard to U.S. immigration policy. Being a senior leader is very difficult. It is time for them to get some moral courage and step up.