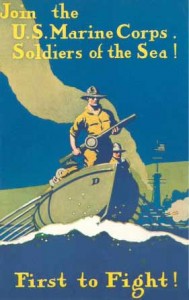 [September 07, 2014] While World War I started in 1914, it was not until April 1917 that the United States entered the fray and only after a number of incidents lead the American people to distrust the Imperial German government. Many do not know the U.S. role was decisive but late in coming. When the U.S. entered the war, it did so with gusto. Interestingly, WWI is the origins of a nickname for United States Marines who fought bravely in support of the Allies. The German Army coined the term “Teufel Hunden” in 1918, which literally translated means Devil Dogs. They did so because of the steadfast determination in fighting during the battle of Belleau Woods.

The German Army was once again advancing on Paris in the summer. Nothing seemed to be stopping them this time and the French Army was in full retreat. In a desperate effort to save Paris, the newly arrived U.S. Marines were thrown into the fight. For weeks, the Marines repeatedly repulsed German attacks and when the German offensive halted, the Marines swept the Germans back and helped force them into a retreat. Paris was saved. The tenacity and fury of the U.S. Marines had stunned the Germans. In their official reports the Germans called them … the “Devil Dogs” … the ferocious mountain dogs of Bavarian folklore.

[Here are some very good websites dedicated to the U.S. Marines]