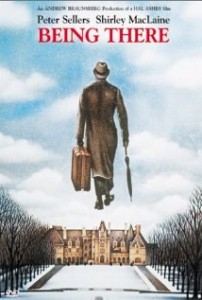 [October 23, 2013]  Many years ago in my college days, I saw the movie “Being There” staring Woody Allen and Shirley Maclaine.  The movie is about a low intelligent gardener whose only knowledge of the world is from watching television.  It is a sort of pre Forrest Gump type movie with the main character who lucks into fame due to chanced circumstances.

Unlike the Woody Allen character, leaders must be present, physically in person, to lead.  This is a variation on the topics of “leading from the front” and “lead by example” but with a special emphasis on the visibility and associated communication with the leader.

Originally, I had entitled this piece “physical presence” but it could have been confused with the physical appearance, the looks of the leader and that is not what I wanted to convey.  The best of leaders must be present to lead – how they look is much less important.

You cannot lead effectively through the television, through teleconference calls, or through computer meeting-rooms.  Virtual presence is no presence.  People must see the leader with their own eyes and hear from the leader the vision of the organization.

Leaders must spend time with their employees.  Simple.  Leading is about people.

Senior leaders must be especially careful.  It is easy to be caught up in the bureaucracy, paperwork, leader training, and meetings that it prevents the leader from getting out.  This takes a concerted effort because the grind of the bureaucracy demands attention.

It is true that if your organization is spread out across a large geographic area that this is more difficult.  Yet, the leader still must make the trip on some regular schedule.  This means seeing not just team leads but even the newest and lowest ranking members.

What this does, is show employees that the leader cares about them and this builds their loyalty.

Woody Allen’s character was shocked at what he saw once he got out of his previously closed life.  Leaders who do not get out much may be surprised what they will learn when they first start visiting more with employees.

The movie “Being There”, directed by Hal Ashby and released by Lorimar, is based on Jerzy Kosinski’s satirical novel about an illiterate gardener who has lived his entire life behind the walls of a Washington, D.C. house, his only knowledge of the world coming from the TV programs he watches.  When his employer and protector dies, he is catapulted into the fast lane of political power.